“Sustainability is a real competitive advantage for us”

Are we capable of reducing our dependency on finite, oil-based raw materials? Can screws be manufactured using fewer materials while maintaining the same functions? And what do employees require in order to develop product innovations? Christian Ziegler deals with questions such as these on a daily basis. He works in the International Production Network for the fixing specialist fischer and simultaneously acts as Sustainability Manager. “At fischer we consciously decided not to set up a separate sustainability division and to have a cross-departmental sustainability team with members from every business division instead”, Ziegler says. This has paid off: For the second time running fischer has been nominated among the top 3 large companies for the German Sustainability Award. “This is Europe’s biggest award in the field of sustainability, and we are very proud to be among the finalists“.

Sustainability has a long tradition at fischer

“Social responsibility and active environmental management played an important role at fischer from the very beginning“. Ziegler states. As an example, the company has been using spring water instead of drinking water for cooling purposes since the 70s, and has been heating its buildings using waste heat via thermal heat pumps since the 80s. “We aim for long-term economic success in harmony with the environment and society”, Ziegler explains. “For fischer, sustainability means safeguarding the company’s future viability”. However, fischer hasn’t always been as strategically prepared in this field as it is today: “It took several attempt before the first sustainability workshops with employees from various business divisions took place in 2015”. The fischer sustainability team, currently consisting of around 15 colleagues, was the result of this workshop – and Ziegler assumed responsibility for the team. “Every employee incorporates information from their area into the team. They also simultaneously act as a multiplier for the other colleagues”, Ziegler says. “In our opinion, this works better than pure sustainability departments, which often act in relative isolation from the rest of the company”.

Taking part in the German Sustainability Award is another main element of the development of fischer’s sustainability strategy. “In 2016 we participated for the first time – and as expected, we were eliminated during the first application phase”, Ziegler says. “But it wasn’t even our aim to win, instead, we wanted an external evaluation in order to subsequently improve”. The expert jury panel provides feedback on every application. “And that was incredibly valuable. This allowed us to identify crucial issues and increase the credibility of our sustainability management within the company”. This proved to be a success: In the second year fischer was among the top ten, and in 2018 the company was among the top three– an achievement which could be repeated again this year. The 2020 German Sustainability Award Ceremony will take place on 22nd November 2019 in Düsseldorf. In 2019 the topic of sustainability underwent an additional crucial development: The fischer Sustainability Compass (see box) was overhauled and elaborated to become both a symbolic and real control element. “We are not aware of any other company using anything comparable”, Ziegler reports. 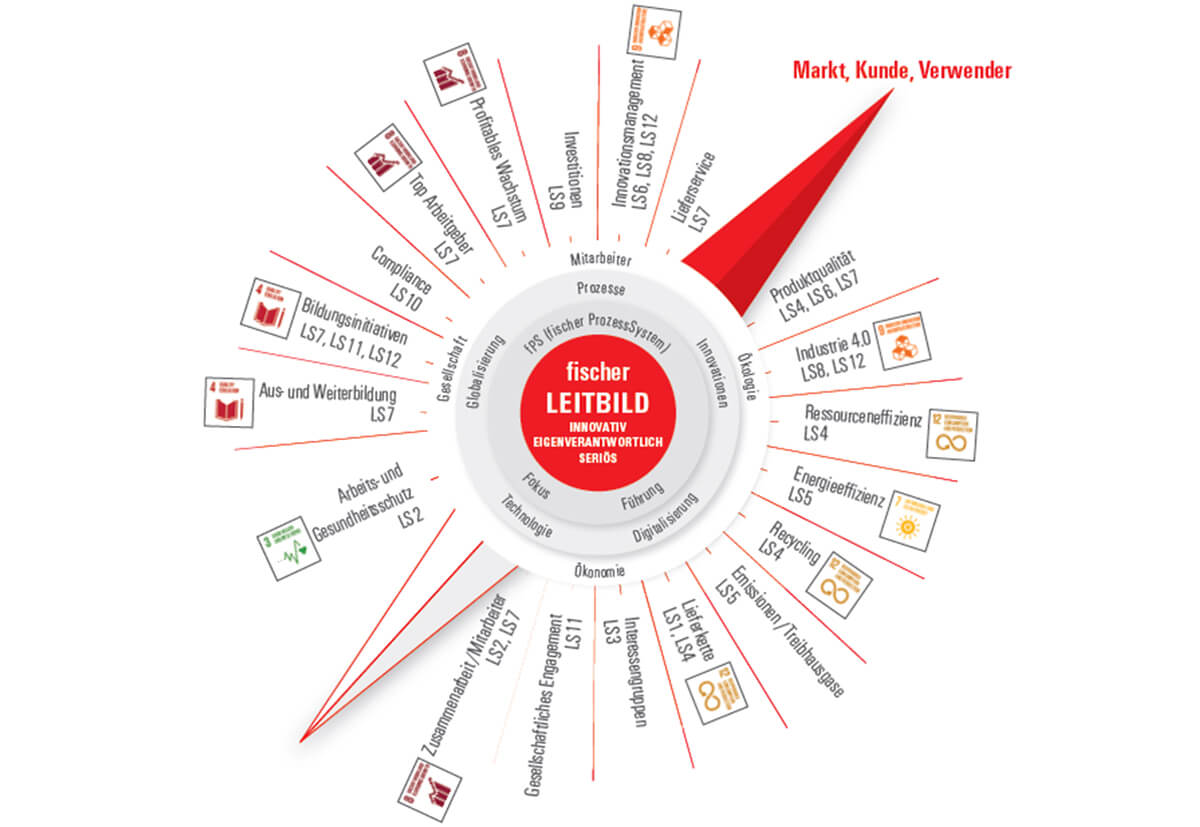 The fischer Sustainability Compass forms the strategy foundation for fischer’s sustainability management. It is based on the three dimensions of sustainability: Ecology, economy and society. It is also based on the Baden-Württemberg WIN Charter and the United Nations’ 17 Sustainable Development Goals. The fischer mission statement lies at the centre, surrounded by 19 key issues. Management has defined a target value for each topic, such as a goal percentage of how many resources to save. This leads to specific, measurable and verifiable measures. The KPIs of these measures are ultimately compiled into a single KPI for each key issue. This KPI is then published in the Status Radar, which is generated once every quarter. This shows fischer’s performance in various topics at a glance, as well as the improvements which were achieved and any areas which require action in order to attain the target value.

The overhaul of fischer’s nail screw is an example of resource efficiency, one of the key issues. “We reduced the shaft from 3.6 down to 3.2 millimetres, slightly adapted the geometry and got rid of the tip, which wasn’t serving any purpose. Thanks to these small adjustments we now use 10% less material while maintaining the same function”, Ziegler explains. This corresponds to 43 tonnes of material per year, saving fischer more than 220,000 euro. It’s not just products that are being optimised, but also processes. Manufacturing the fischer injection mortars FIS EM Plus and FIS V 360 S as well as the GREEN injection mortar generates considerable amounts of dust that require extracting and expensive disposal. However, fischer has succeeded in recollecting these dusts separately, allowing them to be reused. This saves tremendous amounts of just one material alone: “We use around 20,000 litres less silicic acid, preventing approximately 3,100 kilogrammes of hazardous waste and saving a total of around 13,300 euro in materials and disposal costs”, Ziegler summarises. This is incorporated into a digital process control system, which fischer won the state of Baden-Württemberg’s “100 Places for Industry 4.0” award for in July 2018.

“We are constantly searching for alternative raw materials in order to reduce our dependency on finite, oil-based resources such as polyamide or polypropylene”, Ziegler says. In 2012 fischer achieved a major success in this field: With its greenline range the company manufactures the world’s first fixing products made primarily of renewable resources. The plastic components of the greenline range are based on castor oil, which is derived from the seeds of the castor plant. This plant does not compete with food and fodder, nor their respective crop areas, according to Ziegler. Together with the Pforzheim University of Applied Sciences, fischer has created complete upstream chain transparency: “We know where the castor plant is cultivated and how the oil and sebacic acid are obtained and processed”. The greenline range anchors perform just as well as conventional anchors and provide the same retaining values. “These are products of the future and represent a true competitive advantage and unique selling point for fischer”, Ziegler is pleased to say.

Accountability is of tremendous importance to fischer: The aims for each sustainability topic may be defined and broken down into measurable numbers, such as a certain percentage of resources to be saved per year. “But the teams and employees then decide the best way in which to achieve these savings”, Ziegler explains. “This method allowed us to reduce the cost of materials for the fischer nail screw, for instance. This works much better than sending out detailed stipulations from above, as the best solution is often unknown beforehand”.  Regarding the three dimensions of sustainability (economy, ecology and society) as a whole is crucially important to fischer. Appreciating company employees plays an important role, for instance when it comes to occupational safety, which is firmly anchored in all operational procedures. The in-house gym, the company’s cooperation with the “Himmelreich”nursery school and one of Germany’s best canteens contribute to the high health and wellbeing quota at the headquarters in Waldachtal-Tumlingen. This quota has been above the average benchmark for many years, both at the headquarters as well as the company’s other German sites. 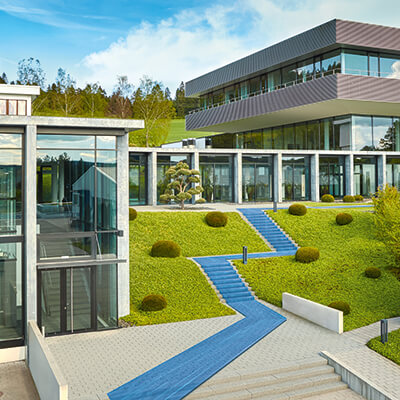 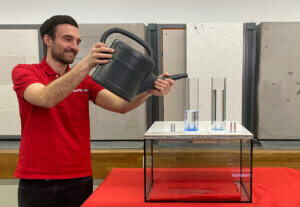